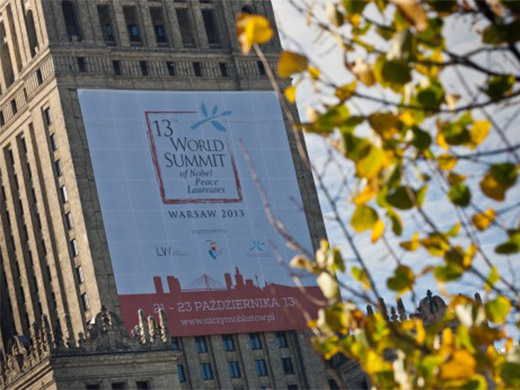 Mazda, Leading Partner of the World Summit of Nobel Peace Laureates in Warsaw, invited more than 100 young future leaders from around the world to participate in a competition to win the ‘Make Things Better Award’. The award includes prize money of €10,000 to be used for promoting a good cause. Jeffrey H. Guyton, President & CEO, Mazda Motor Europe, and Wojciech Halarewicz, VP Communications at Mazda, announced the contest at a Mazda-led workshop entitled ‘Modern Tools of Advocacy’ at the Lech Walesa Institute’s Civic Academy. The workshop was part of the 2013 Youth Summit programme.

“Mazda is a challenger brand that constantly defies convention: We have been using modern tools of advocacy successfully to tell our story and reach a growing number of people, even though we are relatively small compared to our big competitors,” said Jeffrey H. Guyton at the workshop in Warsaw’s Palace of Culture and Science. “The ‘Make Things Better Award’ will support young leaders to do the same, promoting a project in line with the Nobel Peace Laureates’ intention of making the world a better place.”

Heading the Civic Academy’s workshop ‘Modern Tools of Advocacy’, Jeffrey H. Guyton and Wojciech Halarewicz discussed the ways in which modern communication tools can be used to promote causes that aim to improve people’s lives. As a special guest, multimedia artist Phil Hansen encouraged the participants to overcome challenges by telling his personal story of dealing with hand tremor. Nobel Peace Prize Laureate Betty Williams also joined the workshop to share her experience. The ‘Make Things Better Award’ is part of Mazda’s commitment to meet its social responsibility as a company.

Determined to further leverage the company’s presence in Warsaw during this year’s World Summit of Nobel Peace Laureates, Mazda’s Jørgen Olesen und Wojciech Halarewicz also gave a lecture at Warsaw School of Economics, the city’s leading business school, the day before the announcement of the competition. Speaking to about 50 students, they shared insights about what makes Mazda a challenger brand and how this influences the company’s communications strategy.