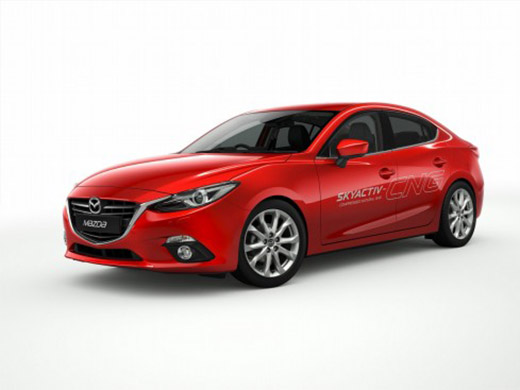 Mazda will showcase the recently launched Mazda3 with a variety of engine types at the 2013 Tokyo Motor Show. The latest model is now offered as a ‘multi-solution’ in response to diversifying fuel types. Beside news on the already released SKYACTIV gasoline, hybrid (for Japan) and diesel-engine models, the Japanese carmaker presents for the first time a Mazda3 SKYACTIV-CNG Concept, which runs on compressed natural gas (CNG). Alongside new-generation models, the displays show Mazda’s most recent technologies and hint at the direction of future models. The 43rd Tokyo Motor Show opens to the public on November 23 at Tokyo Big Sight.*

The Mazda3 is a core model in the Mazda line-up accounting for more than thirty per cent of the company’s global sales volume, and it is the third of Mazda’s new generation vehicles to be completely redesigned. Mazda is proposing the new Mazda3 as a ‘multi-solution.’ Capable of using a diverse range of energy sources, every model still offers Mazda’s trademark fun-to-drive experience. Furthermore, regardless of fuel-type, all models in the Mazda3 line-up feature SKYACTIV engines — a testament to the versatility of SKYACTIV TECHNOLOGY.

Based on an increasing demand for CNG-powered vehicles, the SKYACTIV-CNG Concept adopts a dual fuel system that runs on both gasoline and CNG. Since CNG engines burn fuel at high pressure and the SKYACTIV-G gasoline engine already achieves a high compression ratio it can easily be modified for CNG with only minor modifications.

Vehicles with CNG engines reduce emissions by about 20 per cent compared to those with gasoline engines of the same displacement.

The SKYACTIV-HYBRID models – on sale only for Japan – pair an electric motor with a specially-designed 2.0-liter SKYACTIV-G gasoline engine. It realizes both exhilarating driving performance and outstanding fuel economy performance.

Also on stage in Tokyo is the Mazda Atenza (Mazda6) ASV-5 which is equipped with futuristic safety systems. In a world-first, one of these systems enables automobiles with an in-car autonomous sensor to communicate with streetcars, helping to prevent collisions and support a smooth and safe flow of traffic.