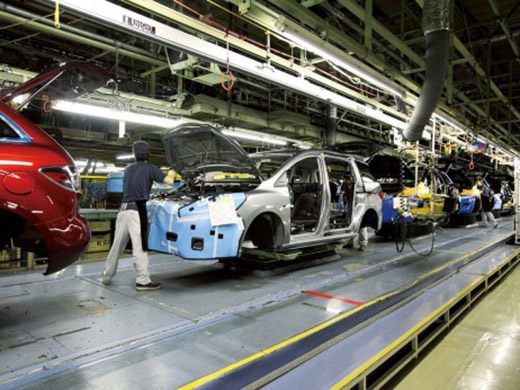 For the first time, the Mazda Motor Corporation has received an official METI (Ministry of Economy, Trade and Industry) award from the county’s Prime Minister at the 5th Monodzukuri Nippon Grand Award ceremony held recently in Japan.

The award acknowledges the numerous benefits of Mazda’s ‘Monotsukuri Innovation’ programme which has helped to revolutionise manufacturing ideas and processes in the automotive industry. The Japanese word ‘monodzukuri’ translates as “the art, science and craft of making things with a dedication to continuous improvement”.

Mazda’s Monotsukuri Innovation is a wide-ranging, across the company structural reform activity, which encompasses not just production processes but also R&D activities and all aspects of materials purchasing.

Launched in 2006, Mazda’s Monotsukuri Innovation has achieved more than a 30 per cent improvement in development efficiency, while streamlining production facilities and tooling investment by over 20 per cent. The programme has enabled the efficient development of high-quality products brought to market in a timely manner. It also helped Mazda to develop today’s highly efficient production systems which can adapt quickly to changing market conditions and fluctuations in demand for specific products. Substantial benefits have been achieved, not just for the new products with SKYACTIV technology, but also for Mazda’s overall business operations as well.

Established in 2005 and held every two years, the METI Awards in the Manufacturing and Production Process Category, reward companies, individuals or groups which have created a production revolution through the introduction and development of ground-breaking systems, technologies or techniques in manufacturing or production processes.

The bi-annual Monodzukuri Nippon Grand Awards are commendations from the Prime Minister which were established with the goal of furthering the ambitions of the talented people who support the concept of monodzukuri in order to develop and pass on the monodzukuri ethos which has supported Japan’s industry and culture, to future generations.