Mazda announces it has been named the official vehicle sponsor of Donington Park circuit for a fifth year running. 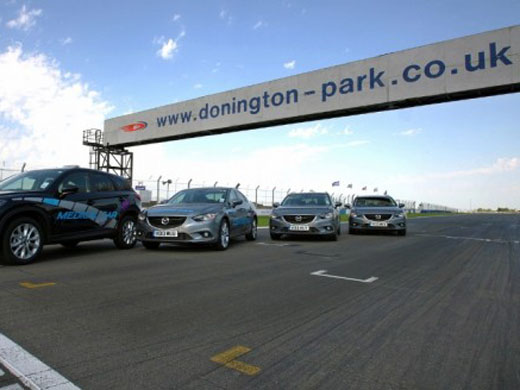 Mazda is proud to announce that it will be the official vehicle sponsor of Donington Park circuit for a fifth year running, providing the famous race circuit with a fleet of 10 Mazda cars.

Spectators and competitors at the Leicestershire circuit will be introduced to the all-new Mazda6 2.2-litre 175ps Tourer Sport Nav, the all-new Mazda6 2.2-litre 175ps Saloon Sport Nav and the Mazda CX-5 2.2-litre 175ps Sport Nav Automatic as they perform a variety of roles at Britain’s oldest race track.  Mazda’s ground-breaking SKYACTIV technology will help maximise the efficiency, performance, responsiveness and reliability of the vehicles as they provide medical, safety and pace support on-track and transport VIP guests and senior managers off-track.

“This is now the fifth year of a successful relationship with Mazda and we are delighted to welcome the all-new Mazda6 and Mazda CX-5 onto the support fleet for 2013,” explains Christopher Tate, Managing Director at Donington Park Racing Ltd.  “Both models are well prepared for the task ahead, thanks to Mazda’s ability to combine responsive, economical and spacious vehicles with sporty styling.”

Mazda’s continued relationship with Donington Park provides the Japanese brand with exclusive track time for testing its 2013 MX-5 production race cars contesting in races such as the Britcar Production Sportscar Series this year.  It will also gain exclusive use of Donington facilities for Mazda events, tickets to all the races including the British Superbike Championship in September and the British GT Championship in October, and use of a hospitality suite overlooking the circuit’s first corner at Redgate.