All-new Mazda6 named ‘Best Petrol Tow Car’ after being praised for its practicality, power and value for money 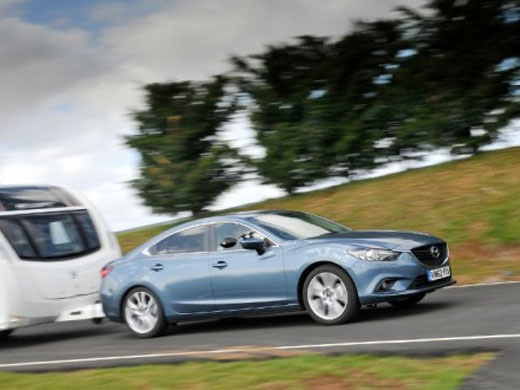 The all-new Mazda6 claimed its sixth award this year after it was named as the ‘Best Petrol Tow Car’ at the Tow Car Awards 2013, held at Woburn Abbey in Bedfordshire last night (13 June).  The Mazda6 2.0-litre 165ps Sport Saloon petrol model won the title after rigorous testing against rivals from Ford, Peugeot and Vauxhall and was praised for its proven capability as a tow car in terms of its practicality, power and value for money.

Each of the shortlisted candidates were put through a series of towing tests at the MIRA proving ground in the Midlands, including 30-60mph acceleration, 30-0mph braking, a hill start and an emergency lane-change test.

Recognising the all-new Mazda6 as the winner, David Motton, Tow Car Editor at Practical Caravan and award judge, said: “If you need proof that diesel power isn’t a must for a tow car, the Mazda6 2.0-litre provides it. In the lane-change test the Mazda6 felt firmly in charge, even on faster runs. Inside, there’s plenty of space for those in the front and lots of legroom in the back. Our favourite petrol tow car is stable and good value.”

The panel of judges also included Deputy Road Test Editor of What Car? and the technical department at the Camping and Caravanning Club.  The Tow Car Awards is a joint venture between both outlets as well as Practical Caravan magazine.

To assess the shortlisted cars, each model is put through the same tests to identify their towing abilities as well as to evaluate value for money and ease to live with for everyday driving. Cars are also judged on how easily extension mirrors can be fitted, whether the spare wheel provision is suitable for towing, as well as safety and boot space.

According to Motton, practicality judges found that the all-new Mazda6: “swallowed a typical family’s holiday luggage with space to spare.”

Jeremy Thomson, Managing Director, Mazda UK, commented: “This latest accolade is a fantastic addition to the Mazda6’s expanding haul of awards and just goes to show the different areas where this car excels.  The award also highlights the affordability which the Mazda6 presents, particularly for families considering a car which has the appeal of everyday driving combined with the capability and practicality of towing a caravan during the holiday season.”

There are a number of accessories available from Mazda to make holiday travel easy and stress-free. Additional features include a bicycle carrier and attachment, roof box, roof rack, snow board/ ski attachment and tow bar including tow accessories.

The all-new Mazda6 is available with a choice of 36 models across the two bodystyles, six-speed manual and automatic transmissions and six trim levels (SE, SE Nav, SE-L, SE-L Nav, Sport and Sport Nav).  Priced from £19,595 to £28,045 (on the road).  The 150ps 2.2-litre SKYACTIV-D Saloon diesel has class-leading CO2 emissions of just 108g/km and combined fuel consumption of 67.3mpg. Benefit in Kind tax for a 40 percent tax payer is £133 a month (Sport trim).