by: Mazda UK in Mazda and you, Top Stories

An interview with Jeff Guyton 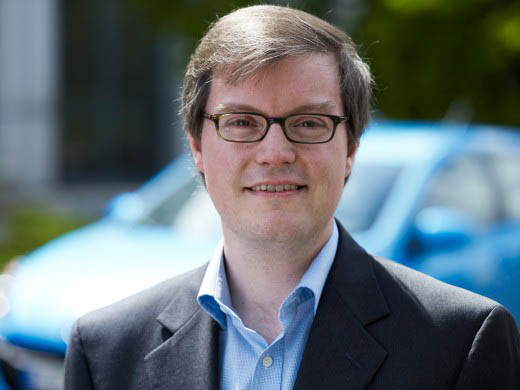 The Mazda Motor Europe president and CEO discusses the challenges facing car makers, connectivity and how SKYACTIV is moving Mazda away from other car makers.

What is the biggest short-term challenge facing car makers?

“The economy. The market in the UK remains buoyant but across Europe practically every market is down; Germany is down significantly. So even in countries where the economy is fairly robust, unemployment is low and wages are still rising, fewer people are buying big ticket items such as cars.”

What about in the mid-term?

“The problem here is a mixture of fuel economy, environmental issues and safety. One particular challenge remains that in Europe and globally every jurisdiction has different ways of incentivising and penalising CO2 and other factors around the vehicle. The UK has its unique formulation, Germany is different, Spain has another one, Switzerland is completely different again and so on. It’s a challenge for manufacturers to optimise their business and if the EU had a common approach it would be a lot more efficient for its manufacturers and citizens.”

“When I was a kid we thought of the car as part of our freedom. There was an emotional connection with the car and getting out and going somewhere. For the next generation, the freedom is on a screen. People don’t actually need or want to go anywhere. They want to stay where they’ve got Wi-Fi. How do we as an industry provide a solution where people have mobility with their devices? That’s a shift that’s coming and to an extent is already here.”

Was the car industry caught out in regard to connectivity?

“Yes and no. When we design a vehicle the requirements for safety, reliability, abiding by legislation, and even tooling up to make the vehicle take time. You would probably be astounded by the number of requirements we must abide by before putting any component into a car. If we want to adapt a vehicle to interface with a device, or provide Wi-Fi on the go, providing that infrastructure takes a lot longer than it does for the device to evolve.”

If Mazda could fill one niche it isn’t currently in, what would it be?

“There are very few global segments that we’re not in.  The segment for SUVs below the CX-5 is an obvious one to fill because it’s one of the segments that’s growing at the moment.”

Is it an advantage being a relatively small player like Mazda or a disadvantage?

“It’s what you make of it. The SKYACTIV programme creates scale across the whole Mazda range. Our engines from 1.3 to 2.5-litre and including the turbo diesel are cast and assembled on the same lines because we have the flexibility to do that. That makes SKYACTIV cheaper across the whole range. It’s enabled us to turn an 800m Euro loss from year end March 2012 into a 300m Euro profit at year end 2013 and only about 10 percent of that is down to the exchange rate.”

“We can pass those savings onto our customers. The latest Mazda6 is already at Euro 6 emissions in standard guise. It’ll cost 600 Euro to turn some competitive models into a Euro 6 compatible car. And we’ve got tremendous BIK benefits because of our low CO2 plus, I think the car is attractively priced versus its competition.”

How much more development is there in SKYACTIV?

“There’s a lot more to come from SKYACTIV and that I think will take us on a divergent path to the rest of the industry. Other car makers are following the downsizing and boosting route. SKYACTIV isn’t about that. Going smaller and more boosted means they’re spending big money in that direction. We’ll continue to take a fundamentally different approach. If someone somewhere wants to follow us, well, they’ve made all that investment in a different direction which limits their flexibility. I think we’ve got some interesting technology coming that will maybe prompt a discussion about the right way to go.”

Guyton grew up in Akron, Ohio where he learnt all about driving on the succession of machinery his ‘serial car buyer’ father brought home. Guyton had to drive because his doctor father would be lying in the boot with a stethoscope trying to isolate the particular squeak or rattle that was annoying him that week. This attention to detail rubbed off on the younger Guyton who claims poor quality fit and finish still irritate him.