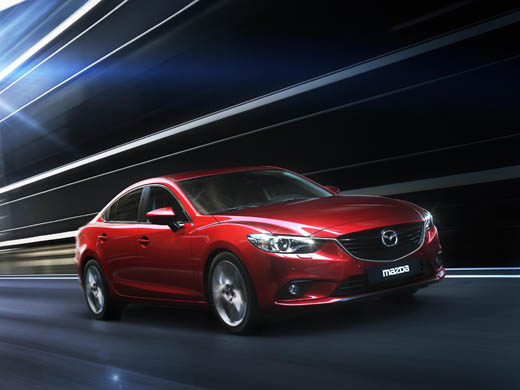 The all-new Mazda6, which celebrates its world premiere at the 2012 Moscow Motor Show, is the second of a new generation of Mazda vehicles which adopt the Japanese company’s full range of SKYACTIV technology and the ‘KODO – Soul of Motion’ design language. Mazda has consistently strived to provide stylish, insightful and spirited cars and the new generation vehicles – the CX-5 compact SUV and new Mazda6 flagship model – deliver a high-quality, exhilarating driving experience, while offering outstanding environmental and safety performance.

Mazda’s environmental technology development is directed by its Building Block Strategy which first calls for thorough improvements in already well established automotive technologies. The next step builds on these improvements with the sequential introduction of electric devices designed to improve fuel economy.

The first such device was the i-stop idling stop system introduced in 2009 with the Mazda3. The second device, which makes its first appearance on new Mazda6, is i-ELOOP – Mazda’s unique brake energy regeneration system that begins charging a capacitor the moment the driver takes his foot off the accelerator.

Electricity stored in the capacitor can then be used to power electric components throughout the car. In freeing the engine from much of the duty of providing electricity to these components, more fuel energy goes directly to powering the car, resulting in further improvements in fuel economy. In addition, a variety of advanced active safety technologies have been adopted for new Mazda6.

Drawing on the full potential of both SKYACTIV technology and KODO design, the new Mazda6 aims to take the “joy of driving” to a new level. As the flagship model of a new generation of vehicles, it will build on the momentum created by the success of CX-5, and heralds a new era for the Mazda brand. New Mazda6 will be introduced to global markets starting in late 2012.

“In developing the third-generation Mazda6, we pursued Mazda’s intrinsic core value: ‘driving pleasure’. We wanted to create a car that reacts and behaves exactly as you expect it to. Part of this involved carefully crafting those parts of the car which you often touch to feel as though they are an extension of your own body,” says Hiroshi Kajiyama, the new Mazda6 programme manager.

“The distinctive exterior design hints at the power and agility with which the car moves. A variety of original innovations support a comfortable and enjoyable driving experience. Mazda’s superb engineering and craftsmanship have created a car that handles so well it seems to respond directly to the driver’s intentions rather than the physical manipulations of steering, braking and accelerating.”

“In short, the new Mazda6 offers the ‘joy of driving’ that people have come to expect from a Mazda, but now the experience starts even before you get behind the wheel and lingers long after the drive is over. I can’t wait to see the look on the faces of people getting out of the car after their first time behind the wheel of the new Mazda6,” adds Kajiyama.