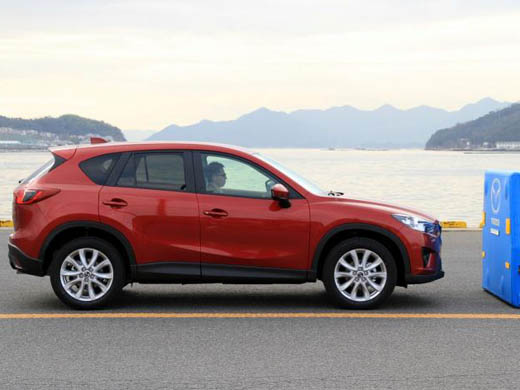 Major European vehicle safety organisation Euro NCAP, has highlighted the all-new Mazda CX-5 – already rated as one of the best performers in its safety tests after receiving its top five-star rating for occupant and pedestrian protection – for being at the forefront of its drive to equip all models with life-saving Autonomous Emergency Braking (AEB).

The European New Car Assessment Programme organises crash-tests and provides fleets, company car drivers and private motorists with an independent assessment of the safety performance of some of the most popular cars sold in Europe.

Now the organisation has called on motor manufacturers to fit AEB as standard on all cars and says that from 2014 it will include the technology in its crash test programme star rating.

Mazda’s AEB system is called ‘Smart City Brake Support’ and CX-5 is one of the few models on sale in the UK that has the potentially life-saving technology fitted as standard across the range.

Typically available on more expensive luxury cars, real world performance data suggests AEB systems can reduce accidents by up to 27 per cent, according to Euro NCAP.

‘Smart City Brake Support’ operates at speeds of up to 19mph and uses a laser sensor to detect a vehicle in front of the car. If the driver fails to slow the vehicle appropriately, or to take avoiding action, the system automatically activates the brakes and reduces the engine output at the same time. That helps to avoid collisions or mitigate the damage from rear-end collisions at low speeds, which are among the most common accidents.

A Euro NCAP survey has revealed that AEB is completely unavailable on 79 per cent of cars on sale in Europe and that 66 per cent of manufacturers do not offer an AEB system on any of their new models.

Michiel van Ratingen, Secretary General of Euro NCAP, said: “A faster penetration of these technologies into new cars will make it more realistic for the European Union to reach its target to cut road deaths by 50 per cent by 2020.”

“If all cars were fitted with AEB systems, many crashes could be mitigated or avoided altogether on European roads. The Mazda CX-5 is therefore a good example for other manufacturers to follow.”

Mazda Head of Fleet Steve Tomlinson said: “Safety and occupational road risk management is a key issue for fleet operators. Mazda is ahead of many other manufacturers in terms of making vital safety-focused technology accessible as called for by Euro NCAP.”

“Many fleets already use Euro NCAP crash test ratings in determining their fleet policy and Mazda’s decision to make ‘Smart City Brake Support’ standard on the CX-5 in the UK will, we believe, further influence fleet manager and company car driver decision-making.”

The Mazda CX-5, a compact crossover SUV that went on sale in the UK in May, is also the first of a new generation of Mazda models, equipped with innovative SKYACTIV technology that delivers major fuel savings and emission reductions for fleets, company car drivers and private motorists.