Rankin brings the All-new Mazda3 to life, with feeling 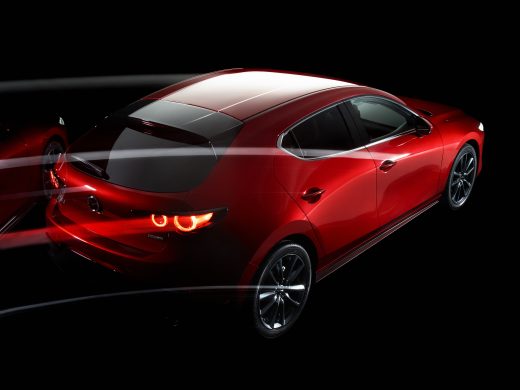 The all-new Mazda3 made its global debut in LA and is now being celebrated with a unique portfolio of images by Rankin, one of the most influential photographers of our generation. The London-based photographer has been at the forefront of commercial and editorial innovation since he co-founded the magazine Dazed and Confused in 1991, bringing a unique aesthetic to fashion shoots and portraiture. Over the course of a high-profile career, Rankin has taken the portraits of the Queen of England, Daniel Craig, Kate Moss, David Bowie, Monica Bellucci and many hundreds more. He has also published around 30 books and been a key driver behind major charity and commercial campaigns for a number of key brands around the world.

To celebrate the new Mazda3, Rankin brings his talents to unlocking the emotion of the new car, as described by chief engineer Mitsui Hitomi, “we don’t design to a spec, we design to a feeling”. It is also a story of pure driving pleasure and a challenging portrayal of true automotive beauty, a car that is as beautiful in motion as it is at rest.

Talking about the shoot, Rankin said: “I wanted to not only show the essence of the Mazda3, but also evoke emotions with the viewer. I wanted to make the images really sensual so I approached the shoot in a completely different way.  I have used light and created motion through actual camera movements, not retouching, that literally bring the car to life for the viewer.”

The brief was to capture the new Mazda3 and bring out the energy and feelings that the Takumi clay modeller at Mazda puts into the car when they craft each model by hand. Mazda is the only car manufacturer that still creates its car from the original full scale clay model.

“Our design philosophy is called Kodo: Soul of Motion, with simple clarity of purpose,” says Jo Stenuit, Design Director Mazda Motor Europe, “Rankin has a wonderful way of capturing the car as art.”

The end result captures the emotions of this important model, the first car in Mazda’s new generation of products. Each picture represents a significant emotion Rankin tried to capture within his work. “You can’t work with an artist and then constrain their art,” says Stenuit, “and this is about two brands coming together to create beautiful art.”

Rankin is a British photographer, publisher and film director. With a portfolio ranging from portraiture to documentary, he has shot The Rolling Stones, David Bowie, Kate Moss, Kendall Jenner and The Queen to name only a few.

Rankin co-founded the seminal magazine Dazed & Confused with Jefferson Hack in 1991, and has since published the likes of AnOther and AnOther Man, alongside over 40 books and the biannual fashion, culture and lifestyle print and digital platform, Hunger.

His photography has been published everywhere from his own publications to Elle, Vogue, Esquire, GQ, Rolling Stone, and Wonderland, and exhibited in galleries around the world, including MoMA, New York, and the Victoria & Albert Museum, London. As a director, through the eponymous Rankin Film, he has created campaigns for the likes of Nike, L’Oreal, Dove, Pantene, Diageo, Women’s Aid, and Comic Relief alongside music videos for, amongst others, Miley Cyrus, Rita Ora and Kelis. Fearless behind the lens, Rankin’s visuals have become ingrained in contemporary iconography.