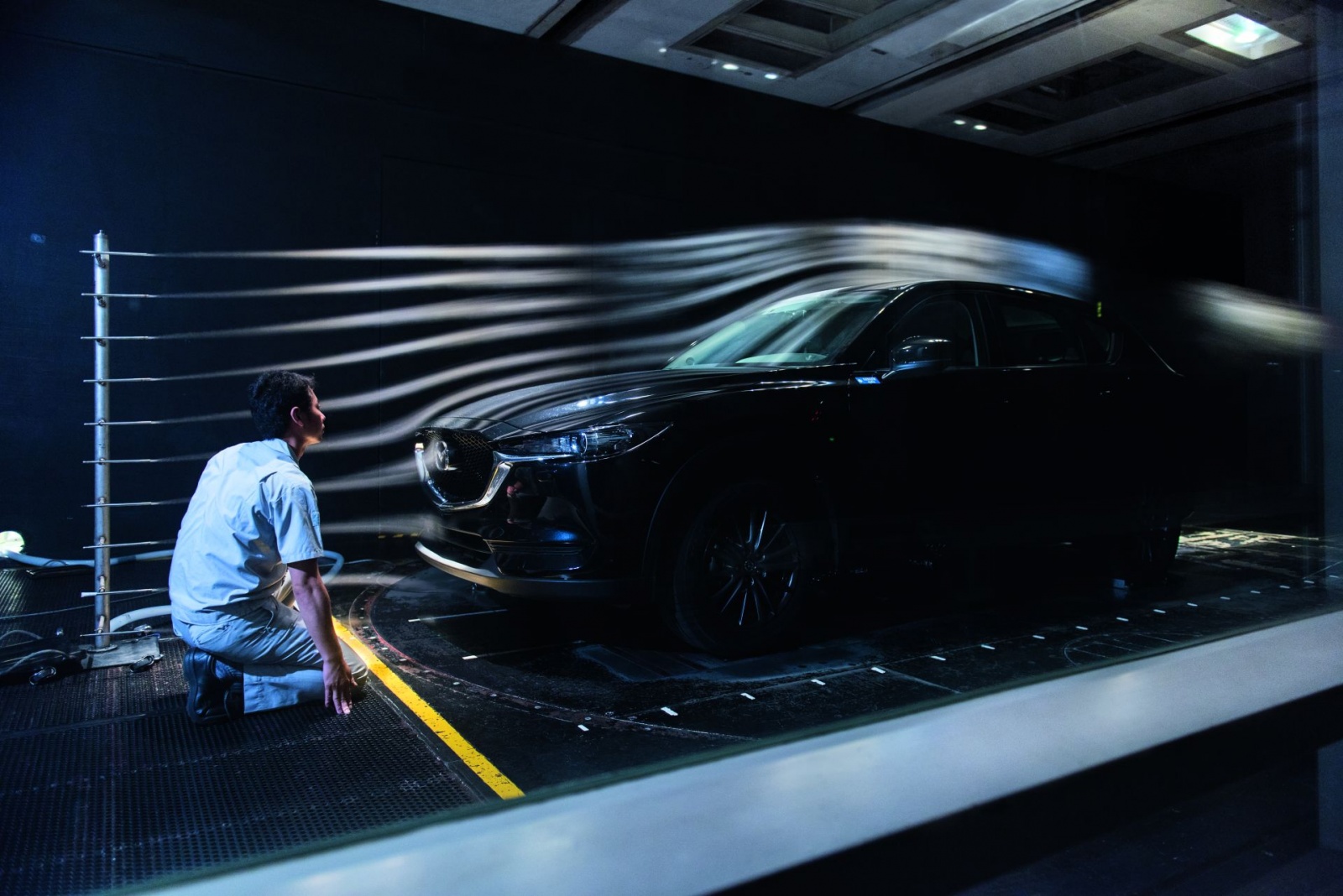 Every Mazda vehicle needs to pass a number of merciless tests before it can hit the road. So, we take a look inside the test chambers of Mazda’s Miyoshi proving ground, just north of Hiroshima:

Since 1983, when Mazda built the aerodynamic testing facility in Miyoshi, every production model passed through its doors. Typically, the aero testing program lasts two years from first concept to finished model. The test chamber’s fan is almost 8 meters in diameter, spins at 223 rpm (which means wind as fast as 225 km/h) and its first subject, back in 1983, was the Mazda 323.

Aerodynamics is, together with the efficiency of the powertrain and the weight of the vehicle, together create the formula that ultimately determines the consumption targets of a car.

When starting from scratch with a new model, for instance when creating the CX-5, the very first aero tests are normally done virtually. They are not as accurate as the tunnel tests but can give a good direction for the further design steps. When the concept comes to life for the first time and hits the wind tunnel, the real aerodynamics work starts. It is a true experience for everybody to see the huge impact the subtlest changes in shape and design have in terms of aerodynamics. 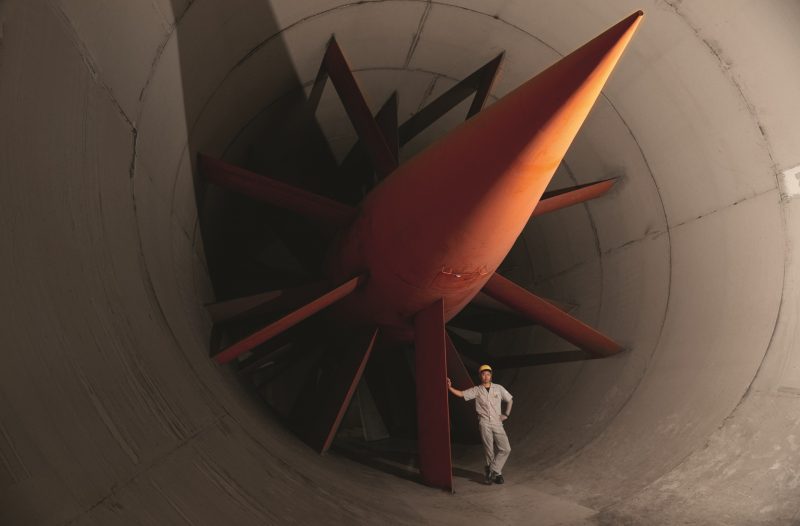 But there is more to fine-tune in the wind tunnel than just the aerodynamics: our colleague Takuya Fujita is working at the Thermal & Fluid Function Development Group, Vehicle Testing & Research Department at Mazda Corporation and is looking at the noise level caused by the wind. For example, he is focusing on and further developing door and window seals. It is all about the details. “If we can create a silent, relaxing, sophisticated atmosphere, drivers will be able to focus more on the driving,” Fujita-san highlights.

When his work is done, he hands over to the colleagues at the NVH test chamber who ultimately focus on all sounds of the car, not only those coming from the wind, but also from the engine, the tyres. 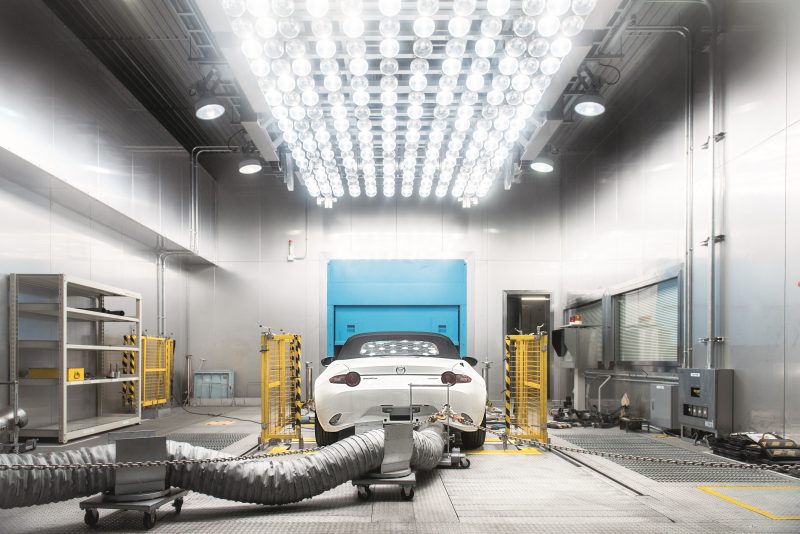 After Fujita-san took care of the sounds in the wind tunnel another team is deep diving into the sound of the vehicle. Why? When traveling, all vehicles are subject to several stimuli. The induced vibration and noise of the engine for example have a number of effects on the vehicle and its occupants, as well as their perception of comfort and the driving performance. High levels of vibration and noise tend to reduce comfort, the outcome being increased fatigue of the driver that in the long term has an impact on safety. Therefore, the Noise, Vibration and Harshness (NVH) chamber is another important testing ground for all Mazdas.

The comfort of the vehicle is very much linked to the level of noise and the noticeable vibrations. Experts summarize this phenomenon with the expression of “Noise, Vibration and Harshness – NVH”. Together with other features, NVH is one of the first things noticed by customers while driving. And it is at the top of the list when it comes to quality criteria. Therefore, the NVH testing became more and more important in the automotive industry.

In Mazda’s NVH chamber, you could hear a pin drop. And experienced team of Mazda engineers measures and listens to all sounds a car can probably make. From the rolling road with a car running at speed (all noises inside and outside the car) to sounds of the doors closing and opening. “We want to harmonize all of these sounds, and fine-tune them so that they will turn into sounds that are enjoyable to listen to,” says Takaya Katsuragawa, assistant manager and team leader of the Quietness Development.

Cars spend months inside the chamber during their development, but there’s ultimately no substitute for the open road, and many thousands of miles of road testing are also needed to fine-tune how a Mazda will sound from the inside and outside. When building the second-generation CX-5 for example, Mazda engineers clearly focused on ‘quietness’ to improve the driving performance of the car. It became an exhaustive effort to identify areas where there was still room for improvement in locations that had already been checked. Using a special tool, the team discovered that the headliner (the interior ceiling) was vibrating slightly, and driving tests revealed a resonance in a rear fender panel. The cumulative effects of such efforts enabled the team to finally reach its “quiet zone” targets for road noise in the new CX-5.

The NVH test chamber opened in 1989, and features a rolling road that replicates speeds of up to 220 km/h. The Mazda 323 Familia was the chamber’s first customer.

In our next story, we’ll go from soundwaves to microwaves: as we give you an inside look at the anechoic room, which is the next step on our tour through the merciless chambers of Mazda’s Miyoshi proving ground. Stay tuned!