My Mazda – James Dasaolu: Six things I love about my Mazda6

As an ambassador for Mazda, 2014 European 100m champion James Dasaolu has experienced the acclaimed range of Mazda cars for himself. He’s currently driving a Mazda6 SKYACTIV-D Diesel 175PS, complete with a 6-speed automatic – presumably to give his legs a rest. Here James shares six things that have really grabbed him about his Mazda6. 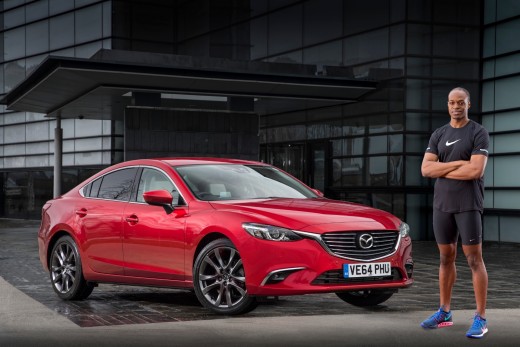 “The Mazda6 SKYACTIV-D has a lot of standard equipment. Included in that is the Bose sound system. I’m no audio buff, but I know there are five speakers in the dashboard including one in the centre, and a digital amplifier and the result is really impressive. The sound is rich and deep with fantastic bass response. I like my music. I listen to most things as long as they don’t have cursing or swearing in them!”

“My Mazda6 has black leather seats. They’re electrically adjustable which means I can get exactly the right position when I’m behind the wheel. I’m quite tall (6ft 1) so I like cars that have plenty of room in them – another box that the Mazda6 ticks. In addition to being well padded, the Mazda’s seats are heated. That’s a must-have gadget in a car, if you ask me.”

“If someone says to you four-door saloon, you certainly don’t think of something that looks like the Mazda6. The first thing that struck me about this car, and the reason I was very keen to drive one, is the incredible styling. The Daytime Running Lights make it really eye catching from the front and I love the profile: it looks really long, low and sporting. But despite that, it’s also practical, with spacious back seats and a large boot for all my training kit.”

“As I’ve said, I’m a big guy and I need a lot of room in a car and the Mazda6 provides that. But my car is also fitted the optional Safety Pack. This includes radar cruise control which maintains distance to the car in front, Driver Attention Alert, which prompts you to take a break, and the Lane Departure Warning System. Some of my friends are amazed by the technology in this car. It means all I have to do is turn up and enjoy the drive!”

“I like to switch off and chill out when I get into the car, especially after an intense training session. That’s why I chose a Mazda6 with a six-speed automatic transmission. It’s super smooth and makes driving a really relaxing experience, particularly around town or in stop-start motorway traffic. It also doesn’t seem to affect the fuel consumption. And that’s another thing about the car: I get such good mpg that I hardly ever need to fill it up at the fuel station.”

“The smartkey is another feature that makes life with the Mazda so easy. I can walk up to the car and don’t have to fish about in my pockets to find the keys – particularly handy for someone who spends their life in track suits which have all sorts of hidden pockets. And it means once I’m in the car I still don’t need to find the key, which makes driving away super convenient.”

Watch James learning to drift in a Mazda MX-5