by: Mazda UK in Corporate

Mazda North American Operations (MNAO) today announced the appointment of Masahiro Moro to the position of President and CEO, MNAO. Moro, a Managing Executive Officer of Mazda Motor Corporation, will take over from Jim O’Sullivan, the company’s long-serving outgoing president, who will be retiring from the company. The changes were announced today to company employees, and will be effective January 1, 2016.

O’Sullivan joined MNAO as President and CEO in 2003, and also held the title of Managing Executive Officer of Mazda Motor Corporation. During his 13-year tenure with MNAO, and 40-plus years in the auto industry, O’Sullivan cemented his reputation as a trusted and widely respected industry expert, with a particular eye toward the importance of the dealer body in supporting the sales and customer satisfaction requirements of the auto industry in the U.S. O’Sullivan was the longest-serving senior executive of any car company in the U.S. at the time of his retirement.

“I could not be more sad to see Jim leave Mazda,” said Masamichi Kogai, President and CEO of Mazda Motor Corporation, the global parent company of MNAO. “Since 2003 he has taken the lead in driving sales and building the brand in the USA and Mexico. Over the years, both MNAO and Mazda itself have been through some difficult times, but Jim has consistently shown strong leadership throughout. With a focus on creating a strong relationship with dealers, he built the sales network we have today in the US and Mexico and led MNAO to increase both sales and profitability and raise the image of the Mazda brand. Both personally and on behalf of all Mazda executives and employees, I would like to express my gratitude to Jim for his many years of service and the huge contribution he has made to our company. I wish him the very best of luck in retirement and I’m sure he will excel in whatever the future holds for him.”

“I have been very lucky that the car business has afforded me so many incredible experiences, and taught me so much,” O’Sullivan said of his departure. “However, now is the right time for me to retire from Mazda. I’m proud of what my team has achieved, and I know that I leave Mazda in a better place than it was when I joined. I turn over the reins to Masa Moro, and will follow the company as it goes from success to success in the future. I don’t know how the next chapter in my life will read, but it’s time for me to spend time with my wonderful wife, my children and my grandchildren. I’ve travelled the world for nearly 40 years, who knows what the future holds?”

Moro joins MNAO with the company riding a wave of sales and product success. The company’s new-generation vehicles have received critical acclaim for their KODO styling and SKYACTIV Technology engineering. At MNAO, Moro will be responsible for overseeing all aspects of the company’s operations in the U.S., Mexico, Puerto Rico, U.S. and the Virgin Islands, including sales, marketing, parts and service, logistics, communications, customer support and regional operations. As Managing Executive Officer of Mazda Motor Corporation, he will oversee Global Marketing Strategy. 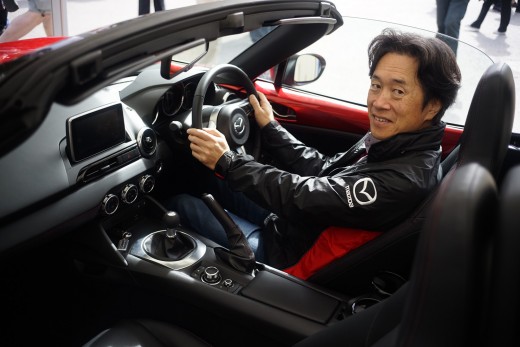 In his previous role, working out of the company’s headquarters office in Hiroshima, Japan, Moro was responsible for Global Sales, Marketing and Customer Innovation. Prior, Moro served as Vice President of Marketing at Mazda Motor Europe, as well as its Vice President of Product Marketing. He joined Mazda in 1983 and has worked in various sales and marketing roles, including two years as General Manager of Global Marketing Division, before joining the European operation in March 2004. Additionally, Moro served as Director of Mazda Australia from May 25, 2012 to July 31, 2013.

Moro, age 55, is married with children, and was born in Kyoto, Japan. He and his family will be relocating to Southern California early in 2016.