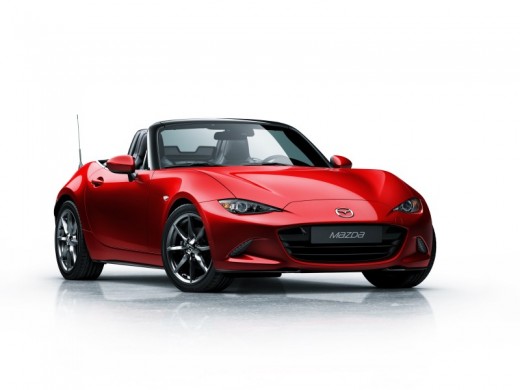 Mazda’s model launch offensive continues today as the unconventional carmaker presents the all new Mazda MX-5 at the Paris Motor Show. Arriving 25 years after the original MX-5 was unveiled at the 1989 Chicago Auto Show, the MKIV of Mazda’s legendary sports car also appears at a time when the company is posting sustained growth both in terms of unit sales and profits.

Its designers came up with a breathtakingly sporty KODO – Soul of Motion design for the exterior, with a lower centre of gravity and longer bonnet along with character lines expressing vitality and motion. Inside, the new model retains the close-fitting yet comfortable fit inherent to all MX-5s over the years. Plus, Mazda has also added state-of-the art technology like i-ACTIVSENSE active safety technology and MZD Connect, the company’s in-car connectivity concept.

Almost 950,000 Mazda MX-5s have been produced over the past quarter century, making it the best-selling two-seater sports car of all time. The all-new Mazda MX-5 can be seen at Paris Expo, pavilion 3, stand 219. The show runs until 19 October.

Let us know what you think of the all-new Mazda MX-5 by posting a comment below.