And they’re off! James Dasaolu sets his focus on the 2014 European Athletics Championships 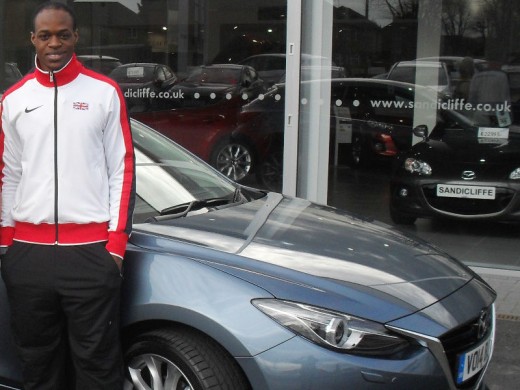 It’s the most glamorous event in athletics, the equivalent to the Monaco Grand Prix or the World Cup final, but behind the scenes of the 100 metre sprint it takes a whole lot of blood, sweat and tears just to make it to the start line.

James Dasaolu knows that feeling. He’s Britain’s fastest contender in the 100 metre sprint race, and the second ever quickest Brit’ to cross the finish line, with a personal best time of 9.91 seconds.  And for the past four months, Dasaolu has been undergoing intensive training as he sets his focus on one of the biggest prize after the Olympics – winning a gold medal at the 2014 European Athletics Championships.

The 26-year old Croydon born sprinter suffered a hamstring injury in February. It meant he missed selection for the Commonwealth Games, but British Athletics named Dasaolu as one of the team of 74 athletes to represent Great Britain & Northern Ireland at the European Championships, held in Zurich from 12 – 17 August.

The opening event will be the 100 metre sprint. Before Dasaolu sinks into the starting blocks, Mazda Social caught up with the medal hopeful, who is a Mazda brand ambassador.

Q. Why is the European Championships so significant for you as an athlete?

A. The event attracts the best athletes currently competing in European athletics. So unlike the Commonwealth Games, we’ll see countries such as Germany, Russia and France taking part, which means the competition is tough.

A. Last year I was ranked number one, so going into the European Championships I will be expecting to win my first senior outdoor medal. I’ve won an indoor medal, and would love to come home with an outdoor medal.

Q. Who is your biggest rival?

A. That would have to be Jimmy Vicaut, a French athlete who has run a 9.95 second time this season. He’s quick, one of the few sub-10 athletes who will be running. And there’s Dwain Chambers, who has also dipped below 10 seconds and is very experienced.

Q. What’s your training regime building up to the European Championships?

A. Most of my hard work is done during the winter months. As you get closer to big competitions you focus on attention to detail, and the small technical details that are going to help you improve as an athlete. You need to arrive feeling fresh and confident, not tired.

Q. How does that get analysed?

A. I work with a bio-mechanist, and we use video to break down the 100 metre sprint into 10 metre segments. So we’ll be looking at how quickly I get to 10, 20 or 30 metres, and focusing on the starting technique – such as did I pop up too high during my launch? We’ll see whether my performance dropped off toward the end of a race and work on all the small details to refine my technique.

Q. How much mental preparation do you use?

A. There’s obviously a lot of race feedback from the team. But I often watch videos of myself running well, executing technique well or winning a race. You should be able to picture what your perfect race is in your mind, down to the slightest detail.

Q. Are you tense at the start of a race?

A. Once you’re at the line you should be in a sort of computer mode, so you’re not thinking about what you’re doing. You’re so well practiced by that point – maybe 200 starts, and 100 sprints – that your body responds instinctively. It’s a groove, there’s a rhythm, you don’t want to over-think it at the start line.

Q. How brutal is an event like the European Championships on your body? How will you feel after the race?

A. You’re dealing with adrenaline, so you have the physical side and the emotional side. I’ll be fatigued for two or three days after the race. But I can’t slow down – there’s the Birmingham Grand Prix a week and a half later, followed by the two final events of the Diamond League.

Q. Do you have icons in the sports field?

A. I’m a big fan of Roger Federer. He carries himself like a gentleman. And his performance on court is elegant, he has finesse, a certain effortlessness. As sportsmen, we all want to embody those qualities.

Click for a timetable for the European Athletics Championships.