Businesses prepare to take delivery of all-new Mazda3, which goes on sale in January 2014 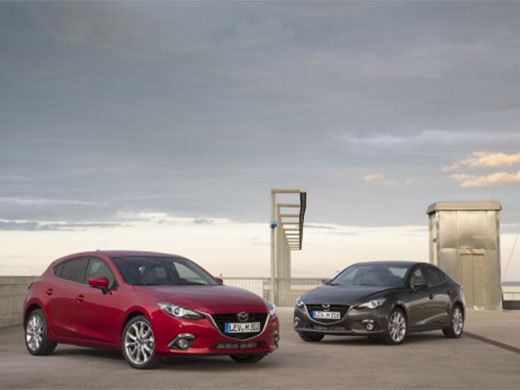 Businesses taking delivery of the all-new Mazda3, which goes on sale in January 2014, will be making an excellent choice as strong residual values are forecast.

Cost management is top of the fleet agenda and company car decision-makers can save money by ensuring the all-new Mazda3 wins a place on vehicle choice lists as depreciation rates in cash terms are among the best in the sector taking account of both volume and premium badge rivals.

Data from vehicle information providers CAP suggests that at the fleet benchmark of three years/60,000 miles, the all-new Mazda3 will retain up to 37 per cent of its value – comfortably out performing key competitors.

The all-new Mazda3 will be available in two body styles – hatchback and Fastback (saloon). The 36-strong model range offers the choice of three petrol and one diesel engine all featuring Mazda’s breakthrough SKYACTIV technology – the SKYACTIV-G 1.5-litre 100ps petrol engine delivers up to 55.4mpg on the combined cycle and emissions from 119g/km; the 2.0-litre 120ps is just as frugal as the smaller engine and also offers up to 55.4mpg and emissions from 119g/km; meanwhile the 2.0-litre 165ps achieves up to 48.7mpg whilst emiting 135g/km of CO2. The 2.2-litre SKYACTIV-D 150ps diesel engine, which meets Euro 6 emission standards has even better performance returning up to 72.4mpg with emissions from 104g/km.

Diesel demand is expected to be particularly strong – due to first-class fuel economy and low CO2 emissions delivering company car tax bills from £48 a month in 2013/14 for a basic rate taxpayer (£96 a month at the higher rate).

Used car purchasers who invariably seek out models with low CO2 emissions and excellent fuel economy reflects on the all-new Mazda3 hatchback and Fastback diesels ability to retain 35-37 per cent of their value at three-years/60,000 miles, says CAP.

Likewise, the all-new Mazda3 petrol-engine hatchback and Fastback models are expected to retain up to 35 per cent of their value at three-years/60,000 miles, according to CAP.

The valuation experts predict that the residual value pacesetters will be the 2.0-litre 5dr hatchback 120ps SE petrol (£16,940) retaining 35 per cent/£5,950 with a similar percentage value being retained by the the other 2.0-litre petrol engine models.

All-new Mazda3 adopts the KODO – Soul of Motion – design theme of the Mazda CX-5 and new Mazda6 and CAP forecasting editor (cars) Jeff Knight said: “As another iteration of the KODO design, all new Mazda3 creates a genuinely distinctive look and feel for a C Sector car.”

“It’s wider and lower, giving it a more assured road presence – a visual appeal that has already paid off for the new Mazda6.”

“Inside there are obvious improvements in the materials used and in the car’s build quality. An increase in interior space has also been achieved, which will be attractive to buyers.”

“Allied with lightweight SKYACTIV technology, a well specified car with a 150ps diesel engine offering from just 104g/km of CO2 is a genuinely interesting and competitive player in a heavily crowded sector.”

“With fresh styling, great vehicle dynamics, low CO2 emissions, excellent fuel economy and now first-class residual values, we expect the all-new Mazda3 to secure its own niche on the fleet map alongside the ever popular new Mazda6 and the increasingly in-demand Mazda CX-5.”

“The introduction of SKYACTIV technology in both the Mazda CX-5 and new Mazda6 within the past 13 months has helped to increase Mazda’s penetration in the fleet sector and the arrival of the all-new Mazda3 with similar benefits will further enhance our corporate proposition.”