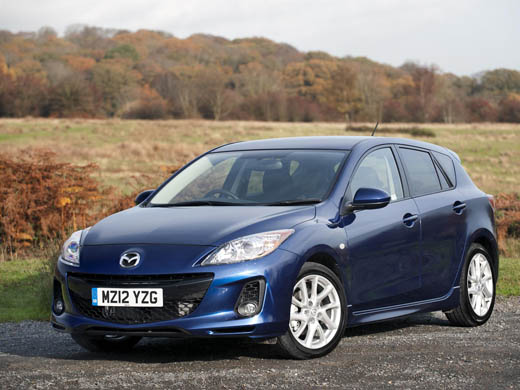 The newly launched upgraded Mazda3, which includes the debut of an emission-busting 1.6-litre diesel Sport model, has been given a residual value uplift.

The upgraded range, which features 18 models with a choice of three petrol and two diesel engines (three power outputs), benefits from an average residual value enhancement of between 3 percent and 6.5 per cent per model over the benchmark three years/60,000 mile lifecycle, according to experts at vehicle information provider Glass’s Guide.

At the benchmark period most models across the five-door hatchback range will retain 34 percent of their value including the new 115ps 1.6-litre diesel Sport and Sport Nav, according to Glass’s Guide. Meanwhile, the flagship 260ps 2.3-litre MZR DISI Turbo MPS will retain 36 percent and the 185ps 2.2-litre MZR-CD Sport Nav 35 percent.

Across the range there is a choice of six trim levels – S, TS, TS2, TS2 Nav, Sport and Sport Nav – as well as the special edition 1.6-litre MZR petrol Tamura and 1.6-litre diesel Tamura. On the road prices for the upgraded Mazda3 range start at £14,995.

Andy Cutler, UK Car Editor – Forecast Values at Glass’s Guide, said: “The Sport trim, available on the 1.6-litre diesel engine for the first time, will certainly help demand as it will appeal to a younger market sector in this highly competitive segment.”

“Overall the model is a well priced, good mid-sized hatchback which is competitive against its rivals. The upgrade should help the values of the vehicle stand up a little more as well as have more appeal.”

“Fleet operators will overlook the Mazda3 at their peril as the vehicle can certainly hold its own in this segment.”

The 1.6-litre diesel models offer ‘low’ CO2 emissions (115g/km) and a combined cycle fuel economy of 65.7mpg. The CO2 figure means that the new models slip in to the 17 per cent company car benefit-in-tax bracket for diesel models in 2012/13.

Virtually the entire upgraded range also benefits from fuel economy improvements with the 150ps model receiving a 2mpg boost to record a combined cycle figure of 54.3mpg and the 185ps derivative getting a 1.9mpg improvement to 52.3mpg.

Sales Director Peter Allibon said: “The residual value uplift given by Glass’s Guide to the upgraded Mazda3, coupled with improvements in emissions and fuel economy on most models, the addition of a new Sport model and Mazda’s established core fleet strengths – excellent vehicle reliability, strong residual values and fun-to-drive characteristics – means corporate appeal has been strengthened even further.”

Advanced safety-boosting equipment, such as Dynamic Stability Control (DSC) and the Emergency Stop Signalling (ESS) is fitted as standard on every model, together with six airbags.

Moving up the range, standard equipment can include: dual-zone climate control air-conditioning, automatic lights and wipers, Bluetooth® technology, integrated satellite navigation and a premium Bose® audio system – depending on model.