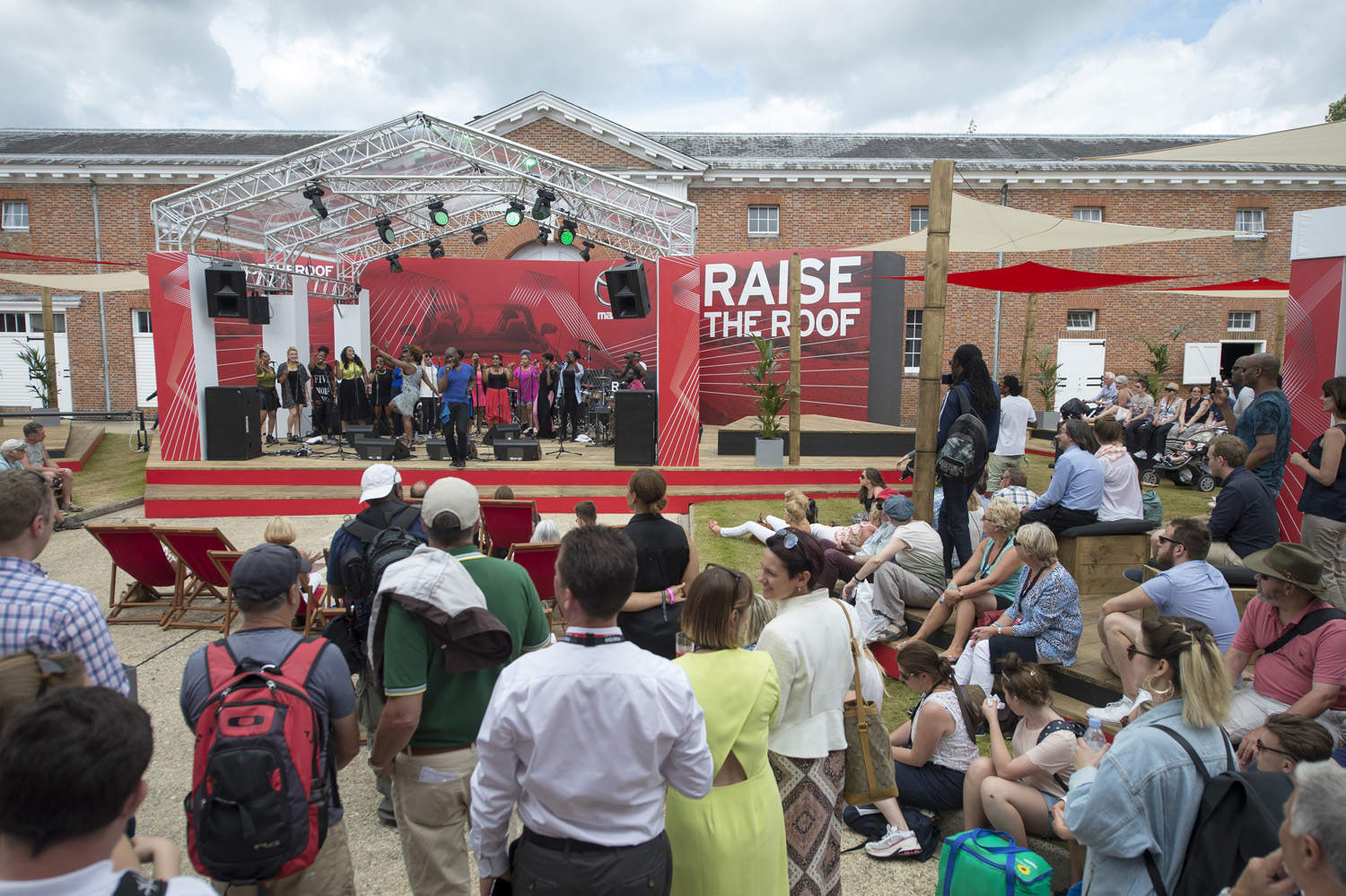 For the second year running Mazda will bring live music to the world’s most prestigious motoring festival. Celebrating the delight of roof down motoring, this year’s ‘Raise the Roof’ will take place within a unique backstage inspired open-air space in the Laundry Green area of the Goodwood Estate. 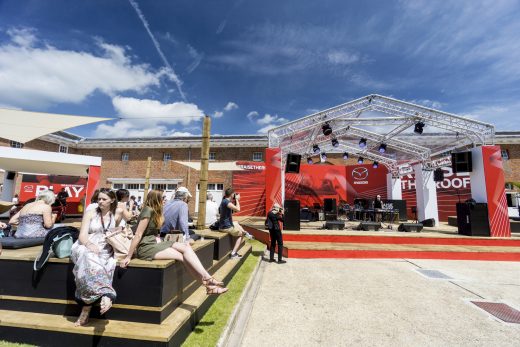 Free and open to everyone, live music will run each day from Thursday 23rd to Sunday 26th June, giving Goodwood spectators the chance to see, hear and enjoy up and coming music acts before they go on to perform at major festivals across the summer. The curved main stage at the heart of the experience sits alongside a series of interconnecting decked areas that have been chosen represent the design, style, spirit and iconic nature of the world’s best-selling two-seater sports car. 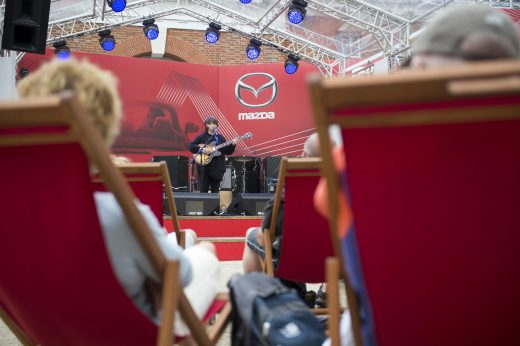 These include the Mazda MX-5 Spyder concept car first shown at the 2015 SEMA tuning show, the all-new Mazda MX-5 and a classic example of the car that started it all – the original Mk1 MX-5. The stage will be hosted by the Royal Organ Duo and DJ Lulu Le Vay and feature standout performances from some of the best acts of last year, Brassroots and Gospel House Choir, along with a similar stellar line up of new and up and coming artists on Goodwood’s only live music stage. 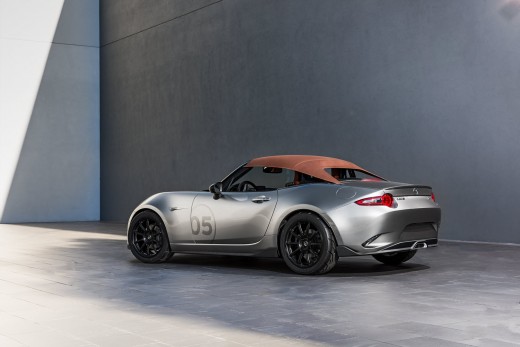 Commenting on ‘Raise the Roof’, Claire Andrews, Marketing Director Mazda Motors UK said, “We are thrilled to bring live music back to Goodwood for a second year. This event allows us to stand out from all the automotive noise at the Festival of Speed and do something different in a uniquely Mazda way. The ‘Raise the Roof’ space allows us to share the fun-to-drive ethos of the Mazda brand, simulating the happiness and feel-good sensations of an open-topped summer drive with an uplifting musical soundtrack. Something few cars can do as well as the World Car of the Year winning all-new Mazda MX-5.” 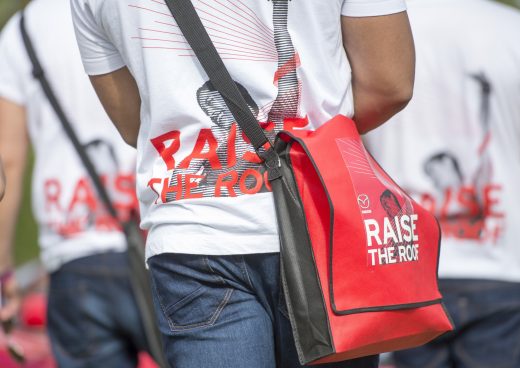 The Mazda main stand at the Grid will feature ‘The Pete Box’, an award winning R1 beat boxer genius that will promote ‘Raise the Roof’ at the Laundry Green by performing around the all-new Mazda MX-5 RF, taking inspiration and sounds from the car to bring into his performance. ‘The Pete Box’ will perform daily across the festival weekend.

Please see below for a full list of artists performing at Mazda ‘Raise the Roof’.

Lulu’s record collection and ear for tunes has created a fun and creative platform for her to share her years of musical knowledge with a variety of audiences. Her repertoire boasts disco, nu-disco, deep house, acid house, 80s electro, soul, funk and R&B – her sets are varied and eclectic. She currently has residencies at the fabulous The House of St Barnabas in Soho, Electric House in Notting Hill, Forge & Co. in Shoreditch, and South Place Hotel in Moorgate. She also collaborates with Meantime Brewery for   their   pop-up   music   venue   BeerBox   in   Greenwich, is featuring at this year’s Lovebox in Victoria Park, and is the resident DJ at pop-up spin studio The Revolution Ride at Bestival.

Since being unable to accept knighthoods back in 2008 due to a gig commitment at The Murderer’s Arms in London’s Shepherds Bush on the same day, the duo have adapted to playing a wide assortment of venues in and around the UK and USA. Originally formed back in 2001, they mainly worked for Her Majesty The Queen, providing the music and general vibe at Royal Functions within Buckingham Palace, Windsor Castle, and Sandringham and sailed the high seas as the house band on the QE2. This allowed them to establish a large repertoire (Funk-Rare Groove-Lounge-Jazz-Psychedelic) and build up a celebrity-packed fan base. Individually the guys have played with James Morrison, The Third Degree and Adrian Meehan, who is the musical director of the world famous entertainment act the Cuban Brothers, and have played drums for artists including Robbie Williams, Mica Paris, the Overtones and Norwegian band Datarock.

Mazda is happy to welcome Brassroots back to ‘Raise the Roof’ for another year in 2016. Determined to establish a booming brass band scene in London, seven-piece horn and percussion ensemble Brassroots have brought their unique sound to legendary stages around the world, including Glastonbury, Secret Garden Party, Bestival and Ronnie Scott’s. Over the past seven years, they’ve worked with Coolio, Rudimenal and Martha Reeves & The Vandellas, and have earned global radio play from the likes of Rob Da Bank, Gilles Peterson and USA’s Jeremy Sole. Their cover of Inner City’s Good Life has already seen 1,500 chart appearances. With the aim of changing how the world experiences live music, the band has recently started incorporating new electronic elements into their shows and added vocals into the mix.

Back for another exciting year at Mazda’s Raise the Roof. House Gospel Choir is the place where spirituality and the euphoria of the dancefloor come together. The choir brings together outstanding singers, all passionate about music and performance and dedicated to giving a great show. Directed by the seasoned powerhouse vocalist, ShezAr; HGC’s leaders have a history of working with choirs and have sessioned and toured with the likes of The Kooks, MNEK, Scissor Sisters, Wretch 32, Naughty Boy, Gorgon City, Stormzy and Labrinth – to name a few. House Choir shows are amped up even further by DJ Fonti, formerly of the legendary Heartless Crew, and his effortless mixing and blending of the biggest tunes House & Garage tunes.

Since their maiden voyage in Manchester 2008, the Riot Jazz Brass Band has been the bare-breasted galleon figure of the Riot Jazz flotilla. Captained by Nick Walters and fronted by the prodigious MC CHUNKY, these brass-wielding sentinels of live music and good times have infected ear-holes, dance floors and festival fields far and wide. “Riot Jazz’s 15-strong brass-heavy jazz combo pack a hefty punch” /The Guardian.

Harking back to the big band sound of 1960s Latin America via the back streets of New Orleans, the infectious, maverick and irresistibly swinging street music of Voodoo Love Orchestra will have the crowd baying for more. This is more an invasion than a performance, with a euphoric riot of musicians weaving in and out of the throng, overseen by a megaphone-wielding High Priestess invoking the spirits of celebration. Delving deep into the heart of the tropics, this globe-trotting ensemble uses the themes of ‘voodoo’ and ‘love’ to straddle a whole range of pan-Atlantic sounds: Colombian Cumbia, Cuban Comparsa, New Orleans Jazz, Mississippi Blues, Nigerian Afrobeat, Jamaican Ska and Ghanaian Highlife.

THE PETE BOX is a solo performer, musician, songwriter and multi-instrumentalist whose pioneering live show has ignited audiences across the world. Breaking out as an award-winning beatboxer he soon redefined the genre through the use of his loop pedal, guitar and an otherworldly, multi-phonic voicebox. Witnessing a THE PETE BOX live show is an immersive experience as he creates songs sound by sound, layer by layer, reveal on reveal, loop on loop, one man building tracks that are as sonically massive as any full band setup or DJ set.