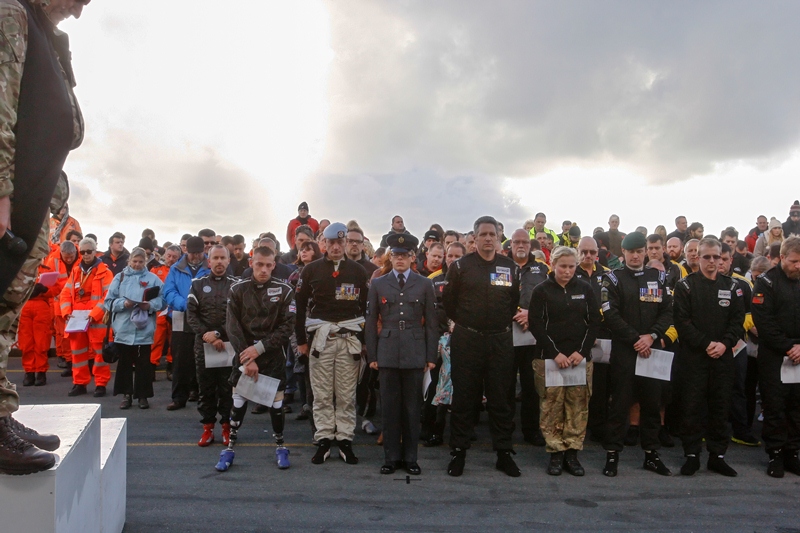 A television documentary that takes a behind the scenes look at the moving story of the men and women using motorsport and the motor industry to help rehabilitation after military service has taken its toll – ‘Race of Remembrance’ will be screened on Sky2, Sky Sports 1 and Sky On Demand.

Presented by ex- Welsh rugby star and extreme environment athlete Richard Parks, the 45-minute programme made by Princess Productions, supported by Mazda UK, will be shown on Sky2 Digital at 9pm on the 26th February.

Rather than the conventional Remembrance Sunday, Mission Motorsport decided to mark the day with a unique eight hour race at the Anglesey circuit in North Wales, with cars driven by professional racing drivers, amateur racers and wounded servicemen, Richard Parks joined one of the teams to take part in a Mazda MX-5.

With 24 teams lining up on the grid, at first glance it looked like a conventional race, the usual melee into the first corner saw cars squeezing each other and sliding around in a typical fashion. However, convention took a back seat at 10.40am as the single minded focus to win at all costs was put aside and the cars headed into the pits, parked in two orderly rows and the drivers, marshals, spectators, mechanics and officials gathered in the pit lane for a service of remembrance led by a military padre.

A large number of the drivers replaced helmets with berets, pinned medals to their race overalls and were called to attention by a sergeant major, many of those on parade in the pit lane were missing limbs lost in conflicts abroad and all had lost colleagues in action. With silence descending on the Anglesey circuit at 11am, all present remembered fallen friends, family and colleagues to the sound of the waves breaking on the shore and the call of the gulls.

Yet, as the service finished a lone voice shouted across the paddock “let’s race” and this most unconventional race continued where it had left off. The field was dominated by Mazda MX-5s which were the chosen race car of 15 of the 24 teams, many of them from the Max5 championship, demonstrating the popularity of this great roadster.

The programme will feature the work Mission Motorsport does to help rehabilitate service men and women affected mentally and physically by military operations around the world. A remarkable film that demonstrates the strength of character and determination of those returning injured from service, but also the unseen toll military operations takes on those that work to protect our national security, Mazda is proud to support Mission Motorsport.

In total six injured servicemen took to the track, including Corporal Davie Birrell who recently finished third in the Max5 Championship. Davie lost both his legs to an IED in Afghanistan but with a few modifications to the pedals and a considerable amount of talent he has demonstrated time and again that his injuries are not a barrier to being competitive in motorsport, posting the fastest lap for his class at Anglesey.

Other motorsport successes to come from Mission Motorsport include Major Steve McCulley, 4th in the Caterham Academy and Mike Courts who has just finished his first season in the BMW Compact Cup.
The race finished after eight hours of racing, however winning was secondary to the support shown for the men and women who had given their lives in conflicts all over the world, while the race also raised many thousands of pounds to continue the great work that Mission Motorsport does with ‘broken blokes’. The Sky programme will air on February 26th on Sky2 Digital at 9pm. To see a trailer click here https://www.youtube.com/watch?v=dH4-8tMMZhM